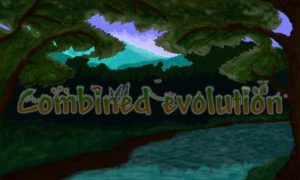 I have decided to start trawling through the App store to highlight games that are worthy of downloading, and where better to start than this charming little puzzle game. It is worth noting that is costs money to buy, but I’ll assess that at the end of the review.

The gameplay of this app is relatively easy to understand, but harder to put into place. As the name suggests, you combine things to progress on the evolutionary scale. This starts with water and earth, which makes grass, and water and lava, that makes organisms (presumably some form of Amoeba). After that you combine various things to make more things. At first this is easy, combine an object with a different habitat to get a different object, such as a swamp plus a Lizard making an Alligator. Others are harder, some are about food (Bird plus Bunny makes Hawk), while others are about combining traits (Lizard plus Butterfly makes Bird). As you can expect, I got stuck, which brings me on to another point: Customer support. Not only did they reply to my post on the app store, they also replied to my email within a day. That is impressive. 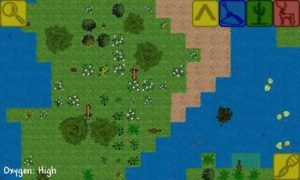 Oh noes, pixels! Boo hoo! No, not really, judging on graphics would be stupid. I like the 8-bit feel of this game anyway. It also stops me from looking for anatomic issues, and suits it, making it look a bit like a 2D Minecraft, just where you craft organisms not tools

This is a palaeontology blog, so what can you expect. Well, this game has no prehistoric animals (One of my few gripes, but then I want prehistoric animals in everything). That said, what they have they do their best. My only complaint is surprisingly with the plants. Now, I’m no botanist, but I can see some, lets say, odd stuff. Grass is a very advanced and modern plant, evolving in India in the Cretaceous, so probably should be one of the last plants to get, while other plants, such as ferns, should come long before hand. That said, the animal evolution I’m fine with. Unlike with a ton of evolution games, birds actually evolve from reptiles and don’t evolve into mammals (I have a bone to pick with Triple lab about that one…). Amphibians and Dinosaurs might have helped to make the evolution happen more smoothly, but nothing’s perfect.

So far I have only found one. Usually when playing a creative game I try to disprove Jeff Goldbloom and contain life. Water holds back most animals, and lave holds back the swimmers. The only ones that can’t be contained are the birds, which makes sense, and the Alligators. Yes, the gators swam across lava. Other than that, I could not find any other glitches, which is always good news. 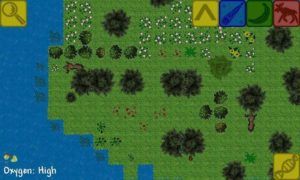 While I love dinosaurs, I wouldn’t suggest they get added now, as it would confuse the evolution of birds (That said, if Alligator plus Hawk makes a feathered Raptor, I would be a very happy man indeed). The gameplay is inventive, the company is helpful and as there is only one glitch. That said, after you get everything, if you are not imaginative enough you will run out of things to do, so I recommend this game if you are a creative person. That said, I happily give this game:

Also, note that the rating system compares this with all games, not just app games. Compared to other app games, this is a relative masterpiece.

For more information about the people who made this, Colludium studio, see their website.

Pictures from the Android App store.

This entry was posted in Dinosaur games. Bookmark the permalink.

One Response to Combined evolution review