This time the colourful animal in question is not a dinosaur but a penguin. When it was discovered we had the technology to find colour, straight away the tests were done. Suprisingly the penguin, instead of being black and white was grey and red! This shows that penguins used to have red bellies but over time they evolved white bellies. On the other hand the change in the back is not as surprising as grey is just light black.

The beast is known as the water king penguin or Inkayacu paracasensis and lived about thirty-six million years ago. Not only was it strangely coloured it was also giant, about 1.5 metres tall. 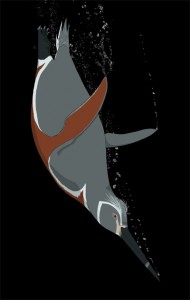 This entry was posted in Beasts. Bookmark the permalink.