In the BBC’s TV program, “walking with monsters” a dimetrodon was dipicted catching and killing a baby edaphosaurus (how dare it!) After reading a book about dinosaur myths, I came apon a part talking about the successfulness of dimetrodon. If you look at its predator/prey percentages you would see that 25% of the animals in dimetrodons’ area were dimetrodons! The other 75% were its dinner! This percentage is equal to that of a spider.

The question is “who were dimetrodon’s prey”? Baby animals were easy meat as the parents were not as protective as the parents of elephants, tigers, hippos ect, more like zebras who are useless at it or komodo dragons who don’t give a toss about their children and, when peckish, might eat them. It is true that dimetrodon might have been a cannibal. On the other hand the edaph in the video was an only child and, as you know with animals, the smaller the amount of children the more protective the mum.

The next thing you have to think about is where the dimetrodon was living. If it lived on the shore of a lake, its main prey was the fish-eating reptile ophiacodon. This beast was nearly the size of dimetro at 3metres long. In these areas dimetro was at its commonest. Then there was the small ponds and swamp plains. Here the smaller amphibian eryops lived. At only 2metres it was not as much of a meal as ophiac so dimetro was less common here. Finally, there was the dry flood plains where the 3metre long diadectes lived.

You might now say “where did dimetro do badly”. The answer is the geraldine bone bed in Texas. The only possible prey was an eel-like amphibian called archeria and, you guessed it, EDAPHOSAURUS! This is probably because archeria could swim away and edaphosaurus, who was the the same size as dimetrodon, 3.5metres, had a spine to scare dimetrodon off, although dimetro had one of its own, and probably lived in herds.

The conclusion: dimetrodon did not eat edaphosaurus! 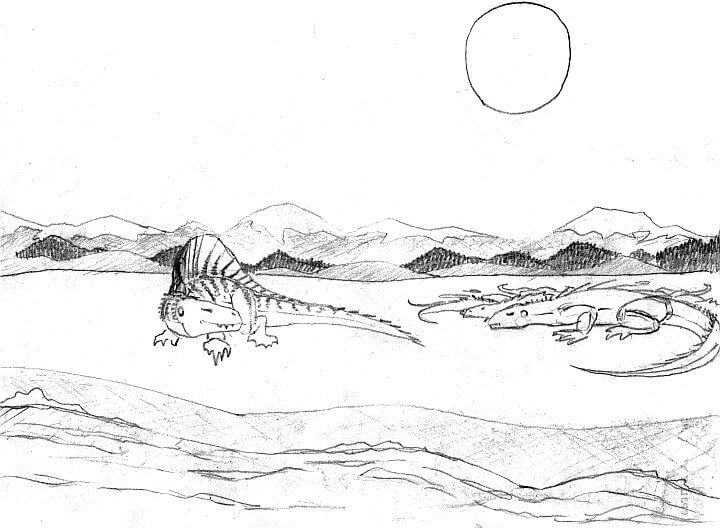 The picture is of dimetrodon’s dinner. Notice that there are no edaphosaurs!

This entry was posted in Edaphosaurus. Bookmark the permalink.

One Response to Dimetrodon vs edaphosaurus